I Know What I’m Doing 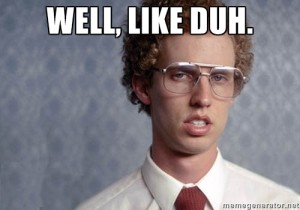 When they are trying to bring the scene to life with details, some beginning songwriters use an approach like:

That does set the scene, but it isn’t realistic conversation. The language is conversational, but in real life, no one would describe the scene to someone who was there. If you want to include descriptive details, you have to work them into lines that someone would actually say. For example:

Those lines give listeners essentially the same information as the first example but they are more believable as something a man would really say to a woman in that situation.

The same principle applies if characters are talking about past events. One person wouldn’t need to tell another, “We both got really drunk last night,” but if that character said, “Was your hangover as bad as mine this morning?” that question would make it obvious to listeners that they got drunk the night before.

It can work well to create a conversation between two characters in a song. It let’s listeners feel like they are watching the action, eavesdropping on what is being said. But to be effective it has to feel real.